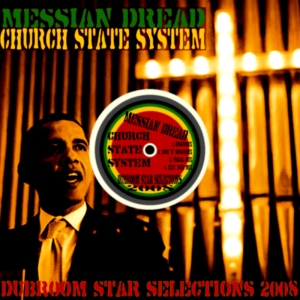 A militant, foundational Steppers drum and a typical Messian Dread bassline carry a message where Pastor, President, Soldier and Terrorist are identified as all working for the very same system.

The title comes in four different mixes, each one with their own specific vibe and purpose:

DISCOMIX
This is a classic Reggae mix, with the vocal part followed by a DUB echoing the first half of the mix.
TRUE CD QUALITY WAVE AUDIO (63 mB) - 320 KBPS MP3 (14 mB)


VOCAL MIX
A rarity for Messian Dread music: this track only contains the full lyrics and although there's mixing going on, no Dub in this one.
TRUE CD QUALITY WAVE AUDIO (31 mB) - 320 KBPS MP3 (11 mB) 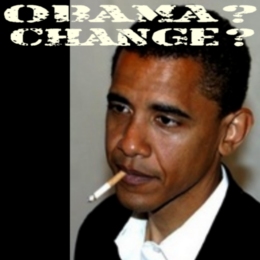 WWW, November 4 2008 - At the moment I write this, it is not yet known who will be selected to be the next president of the USA. By the time you will be reading this, you will probably know who the winner turned out to be.

Well, it seems so. It seems, like we have all survived the last eight year in which the USA has seen the introduction of the police state, lies which costs millions of lifes, a stolen election and a president of whom it is said that he spent more money than all the president before him combined, leaving the country with an enormous debt.

He is also the most unpopular president of all times. Speeches he gave for the rich and wealthy would include lines like "some people call you the elite, I call you my base", while he made fun for the national press by showing a photo of himself looking under his desk, and "quoting" himself as saying "Those Weapons of Mass Destruction Got To Be Somewhere"...

Just before his term runs to an end, we get the financial crisis. Bush gives billions to the people he called "his base", while making fun of the people that believed his lies on the WMD's and sometimes even go so far to go to Iraq as a soldier and kill innocent people... or be killed.

And then, all of a sudden, there he is and he has a word.

There are Reggae singers who make songs for Obama. Millions of black people will cast their vote, many of them for the first time. They have their hope on a man of who I recently heard that he seems to be related to Dick Cheney.

He's got a who's who of the vampires that loot Jah creation behind him. Henry Kissinger, for example. A man who has to consult with his lawyer before he goes to another country since he can be arrested because of his many, many crimes. Or Colin Powell, the man who lied to the whole world and made the people believe that Saddam Hussein had Weapons of Mass Destruction.

His opponent, John McCain, is far behind in the polls. There are stories that the same people who gave George Bush his presidency, are now working for McCain. Indeed, the same stories we hear the last eight years start to be reported by the Dutch media now again.

When McCain get (s)elected, election fraud is proven.

But when Obama gets the job, will it bring that change?

Asking the question is (almost) answering it.

Obama is the media favorite, he's the elite's favorite, and when he brings change, this will not be for the good of the poor people. Maybe you can even say, that honest people would never be able to reach the position of being a presidential candidate anyway!

Additionally, there is only one way to know if Obama is really not the next guy that the elite pushes forward, and that is when he would be killed just like that other president who was so popular: JFK.

Today, I was thinking about these people who pray for either Obama or McCain to become president.

My prayer is a bit different.

I just prayed one word: "Maranatha".

One Love, Give Thanks,
Messian Dread
at 18:40 No comments: