WWW, March 3 2009 - In the ancient book of the Kebra Negast and the ancient Ethiopian Book of Enoch, we can read the true reason for the Great Flood, for what the Sodomites were really doing and who the people were that had to be killed by the ancient Hebrews.

The denial of these teachings have led to terror regimes through out the centuries, when people like the successive Popes and reformers like John Calvin institutionalized their heresy dressed up as "Christianity".

Today, we see that these teachings are still alive and very much kicking. It is the massive of "born again Christians" who voted for George W Bush, for example. The millions that are killed in the unjust wars in Iraq and Afghanistan speak for themselves and their innocent blood cries unto the Throne of the Almighty One.

In this edition of Dubroom Online, you can read a report about a group that take the teachings of the so-called Church Reformers until their ultimate consequence.

When I will ever meet them, they will tell me -with a smile on their face- that their God hates me. I will tell them: "Smile, Jah Jah Love Ya"

WWW, March 2009 - Their album "Heart of the Congo's" as well as a number of singles they recorded in the Black Ark studio's put the name of the Congo's on the Reggae Map with a huge dot.

Two tracks from the legends! 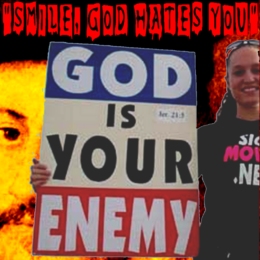 WWW, February 2009 - In a recent press release, the group behind the website "God Hates Fags" announced their plans to travel to the Netherlands and picket the burial of nine people who recently lossed their lives in a plane crash at Amsterdam Airpost.

What drives these "Christian Taliban" and what can they teach us?