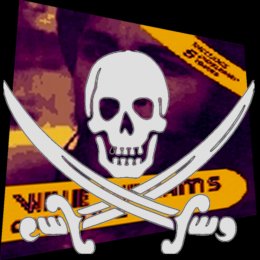 WWW, October 3 1014 - In a very informative, but partly disturbing interview the Midnight Raver recently held with well known Reggae Singer Willi Williams, the Ammagideon Man was quoted about a release called "One Love". As the album was reviewed and promoted by the Dubroom, it was shocking to hear what the brethren had to say about this release. In short: it's pirated, don't buy!

Ask Bunny Wailer about the early Wailers Black Ark recordings you can find almost everywhere. Ask Scientist about his well-known Greensleeves Dub Series. Ask Willi Williams about "One Love. Not the concept, but the album. Released by UK-based Smugg Records. Who were so kind to send the Dubroom a promo copy years back when it was released. Which was subsequently reviewed and promoted from this very website.

This is what he has to say:

“The ONE LOVE record is a pirated record. These guys been releasing my records for years and no matter how you try to get to them to let them know that it is not legal they insist on doing it. I send plenty letters from my lawyers and every ‘ting but they are shady. Its a shadowy business but Smugg Records is one of the pirates, they just using that name to sell the records. Especially this new record was pirated by them at whoever is behind this Smugg Records. I even got to one of the guys one time and he was very shadowy and could not tell me how he got it because I have no agreement with them. You know I did some tracks way back with an individual named Steven King out of the UK – him have a label called Uptempo – I did a couple of tracks with him as producer and he went and took my tracks from these sessions along with some others and I suspect that is how they release these pirated records.”

The Book of life teaches us how "The Love For Money Is The Root Of All Evil". That's not the One Love Willi Williams sings about, that's not the definition of One Love over here in the Dubroom, either. That's the love for pounds, euros, dollars. The kind of love that brings people to make wars and kill millions.

Needless to say that from this place we offer our apologizes -without any objection- to Willi Williams for having promoted something that did not provide him with the daily bread that he works for so hard.

Equally, we gladly extend this piece of information from Willi Williams aka The Messenger Man to everyone who considers buying or promoting the album.