Ras Kitchen - Anything Inything/Stay When it Dubs (Virtual 7") 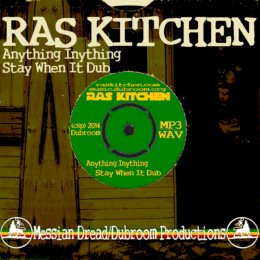 WWW, July 2014 - Visitors and readers of Studio Dubroom will have had the opportunity to get to know RAS KITCHEN, whose voice is used for this two-track Dubwise release. Now is the time for all readers and visitors of the Dubroom to get acquainted with this remarkable Jamaican brethren as we humbly present almost eight minutes of Ras Kitchen In Dub!

Ras Kitchen lives a humble life with his family in the hills of Jamaica. At times, he welcomes visitors in his yard and introduces them to this life, giving them a wealth of knowledge and insight that they would never have gotten if they would just have visited the tourist places. Another thing the Ras is known to do is to introduce Ital Cooking and Jamaican Cooking to the world wide audience and nation-wide on Jamaican television. His video's are priceless, even when you are not into cooking!

In order to raise a little bit of money, for just a a little bit more decent living if you will, Ras Kitchen released two free vocal sample packs from his website. They are reviewed for Studio Dubroom, a sub-site of the Dubroom where producer of (DUB) Reggae can find information and download things. It's not really something for people who are not actively involved in producing Reggae Music, but when Ras Kitchen comes with two Dubwise tracks produced in the Dubroom Studio especially for the Ras things obviously change.

The first "side" of this "virtual 7 inch" is the more relaxed one. As Ras Kitchen speaks about Rastafari and how the music will "just gwaan, right on and on" while the -excellent- backing vocals speak about "no regrets", the drum and bass leads us all the way from the top to the very last drop while some heavyweight Dub mixing goes on, at times completely scattering the chords into a thousand pieces.

"Stay When It Dub" has a much more intense vibe, both in the hints to JAH, the Source of Living Water, as well as the music and mixing. The effects are layered on top of each other, while the heavyweight bass and drum keep on playing. Every now and then they make room, sometimes for a flute and at other times something different happens.

The music is created and mixed with JAH love and respect for RAS KITCHEN. When you at least like the music a little bit and you have a little bit of money to donate, please visit his website and use PayPal to donate. And tell them the Dubroom sent ya. Or don't.

With Backing Vocals of Dan Man and Aiva.