CAPITALISM VS THE ANTICHRIST?

CAPITALISM VS THE ANTICHRIST?
AN OBSERVATION BY MESSIAN DREAD 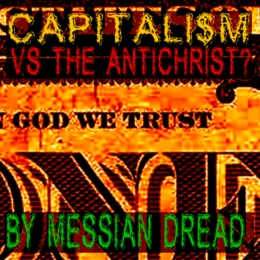 WWW, October 2008 - As the financial crisis reaches what is called the "real economy", many Americans have critique against their government who is practicing what they call "Socialism". This very same word can be used to summarize the critique against the recently released New Age movie "Zeitgeist II".

I was born in 1965, in Europe. Until I was about 25 years, I lived with the fact that about a couple of hundreds of kilometers away from me was something called "The Iron Curtain". This "Curtain" divided Europe in a western part that was functioning under what was called a "Capitalist" system, and an Eastern part which had "Communism".

When the Soviet Union fell and Germany re-united after the fall of the Berlin wall, it was said that Communism had been defeated and Capitalism had prevailed.

More than Europe, the USA were -and are until this day- a symbol for Capitalism. Many people in the USA even speak of Europe as living under a so-called "Socialist" system and they are not referring to the former Communist countries there. They are speaking about countries like the one I live in, the Netherlands. I can also understand why this is seen as such.

When I hear Alex Jones reviewing the movie Zeitgeist, I hear him hailing up competition, jealousy, greed, even scarcity. Where Alex Jones calls himself a Christian, he can hardly say that it is good for mankind that there is many people who do not have food because there must be some scarcity in order to create a "healthy free market". Or that it is okay with him that thousands and thousands of people die in his country because of "Free Market mechanisms in Healthcare".

My critique against the New Age Movie Zeitgeist would not be that they make propaganda for Socialism or Capitalism, but that they make propaganda for the Antichrist. And indeed, being born under a "Cold War Consciousness" where Communism was portrayed as the Antichrist System, to me it is not new that the Capitalist "Free Market" Economy was hailed up as Gods Own Answer against the Satanist Communists.

And I strongly disagree with this.

There is something very wrong about Capitalism, and I would call it as Satanic as the Communist or even the Socialist system, and much of that evil can be seen when you observe the current financial crisis.

A "Free Market", for example, makes sure that only the fittest of the fittest shall stand. Only when you have the character of an entrepreneur, who dares to take risks and has enough insight in trade, who has money too, will you like the Free Market.

That very same Free Market does not give this freedom to people who cannot go further than to make themselves available for work, so they can be hired, for money, by the entrepreneurs.

When I hear the American presidential candidate say to an employer that he can "live the American dream and do with his money what he thinks best for his employees", I wonder why that American dream would be that one can decide another one's life just like that.

People like me, who are handicapped and have not even a perspective for a paid job, are even worse of in a Free Market system. If I were to live under the Capitalist System such as in the USA for example, I would not be able to do what I do. I would have been dead, frankly.

The Answer will be given at the moment, that Bright Day, when Yesus Kristos comes to end Babylon, Capitalism, Socialism, Zeitgeist-ism, every ism.

And in this time, this become pretty well clear. Crisis here and there, the total bankruptcy of the Matrix that people believe to live in is scattered before our very eyes. Out of this Chaos, will come the New World Order, and that New World Order will be downstroyed by the Creator Himself.

One Love, Give Thanks,
Messian Dread
at 16:44 No comments: