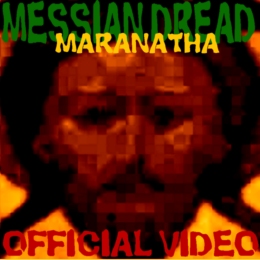 WWW, March 2009 - It's not just the tune with some pictures, it's Messian Dread's very first Music Video, produced in the Dubroom Studio ofcourse.

"Maranatha" is a cry to the Lord God JAH: "Please Come Again"! In the video, we're taken throughout the last 500 years of history wherein Babylon has been brutalizing the people in so many ways. We see video recordings from police brutality and army soldiers in Iraq, but we also see signs of the Hope and it's not Obama, who is also shortly featured: we see Ethiopia, the Lion of Judah, and Yesus Kristos!

The track is almost 4 minutes long, where the second part is in DUB Style. Otherwise, the word Discomix would be quite inappropriate indeed. As with the audio DUB part, the video also looks back at just what the lyrics are all about. As Messian Dread is mixing, we see just what a musical chanting down of Babylon and worshipping the Most High JAH actually can be done in DUB!