WWW, December 26 2009 - Next to my own musical projects, I also hope that the year 2010 will produce the first releases from the new Dubroom studio.

A couple of years we started to set up a studio where it would be possible to record actual musical play by musicians but things happened and that plan had to be put in the freezer.

Currently defrosting, if you will, Jah Willing we will find the time and energy to not only set up this studio so that the studio band can play, but also will actually play, record, mix and release! 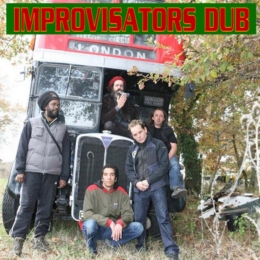 WWW, December 26 2009 - Sirens and a Steel Drums, everything on top of a heavy digital Drum and Bass line in the UK DUB tradition: French based Improvisators Dub knows how to turn their digital studio into a Dub Center extraordinaire.

WWW, December 2009 - In this early 1990's collaboration with the Roots Radics, Mikey Dread revisits the original concept of his original African Anthem album. However, the Dubs contains less Dub mixing at the mixing boards and some would even consider them instrumentals...