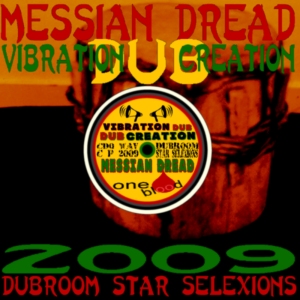 Two massive and thunderous One Drop riddims, two deep and spaced-out DUB mixes. As the expansion of the Dubroom Studio begins to pay off, the tunes contain real percussion and guitar play on top of much more effects than before.

DUB CREATION is the necessary follow-up of Vibration Dub: the tempo is faster, even more percussion is added and the Space Echo has not one moment of rest throughout the entire mix.

Two massive and thunderous One Drop riddims, two deep and spaced-out DUB mixes. As the expansion of the Dubroom Studio begins to pay off, the tunes contain real percussion and guitar play on top of much more effects than before.

VIBRATION DUB starts off with an introduction roll and some spaced out echo's on the horns: the vibration is deep and will only lead to deeper DUB... 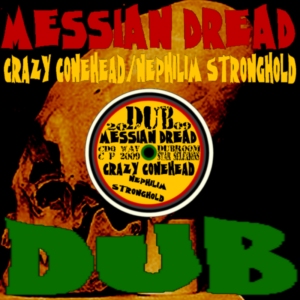 NEPHILIM STRONGHOLD, a Dub from a Steppers riddim, has a joyous vibe. As "the whole point" of the "incidents where God commands a population to be exterminated" is explained in just a little bit more than the title alone.

CRAZY CONEHEAD is a massive One Drop tune with a solid bassline and effects that take you from one vibe into the next instantly, earthquake style.

MESSIAN DREAD - DUB SHALL GO ON

As we close of the album, we're almost 37 minutes after pressing "play". We just had the last tune, with some pretty majestic horns running through several different effect devices before it lands into the ear of the listener.

DUB Shall Go On!

Some riddims can go on and on: this is one of them. A solid drum and bass, some catchy chords and some heavy, heavy echoing on just about everything that reaches the master mixing board.

Not just echoing, by the way: without using one, it's definitely like there's a phaser applied over some of the echo's.

No, this is not about the "Holy Grail". This is about the Real Chalis: the heavyweight Herb Smoker's delight as I would say. Without apology, here is a massive DUB with loads of different echo's as the Drum and Bass take us from the top to the very last drop.

Some really no like smoking, that's why you get smoking bans all over the earth. That's smoking bans of tobacco, that is.

Herb Smokers are pariah's almost everywhere they go, too. This tune is a big up to all the Herb Smokers: an upfull even joyful steppers riddim that goes pretty strange every now and then!

MESSIAN DREAD - HE WALKS IN DUB

Cool and dreadly: describing the drum and bass line in "He Walk In Dub". You need some pretty good bass speakers to hear the bassdrum as it's playing an energetic pattern that will cause an earthquake when properly played.

The bass goes deep, too. The line is monotonous, and when filters are applied, everything goes even deeper.

MESSIAN DREAD - HE PRAYS IN DUB

Time for a little Rub a Dub style in this collection of Dubs from early January, 2009. Well over a decade after releasing the first Messian Dread music on the Internet, there's nuff reason to give thanks and praise and so we do as we call on the Name of the Most High: JAAAAAAAAAAAH!

Another One Drop drums, this time with a different bass drum and of course a completely different riddim than the previous track of the album "DUB Shall Go On".

Echo's totally transforming the original instruments, sudden stops of the music: sometimes you go deeper than the deepest ocean, the other time it's like free flying in the sky.

After two heavy duty Steppers, it's time for a little chilled-out vibes. A solid One Drop drums and matching bassline serve as the foundation for a weird gathering of sounds and vibes created by effects and instruments.

A perfect tune to accompany your enjoyment of a blessing that is forbidden in most places where Babylon pirated Jah Creation.

Starting off with the first track left us, we dive deeper into realms of DUB where electric guitars turn into haunting howls, just like other instruments that run through the echo device, by the way.

Starting the album and the tune with a vocal sample asking an intriguing question: the opening track for "DUB Shall Go On" is more than a heavy duty steppers.