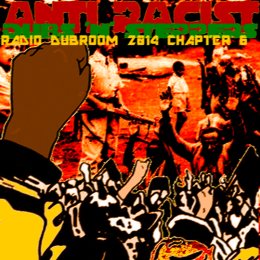 WWW, June 2014 - Another selection of stricktly heavyweight Steppers coming your way! Featuring some recently reviewed Net Label releases, a healthy portion of UK DUB and Roots, a Lyrical Benjie classic from Dubcreator's MP3. com days and two recent Dubroom productions, one of which is not released and perhaps might not be released so this mix could very well be the only opportunity to hear it.

Starting off with a no-nonsense track by Canada's Dub maestro Dubmatix, taken from a free compilation recently reviewed in the Dubroom. Also reviewed on mp3.dubroom.org is the brand new anti-racist Vocal and Dub by Yeyo Perez and the Bass Culture Players from Spain. Mr Bossman Dub by Dub Machinist is als taken from the free "Lost in Dub Chapter 1" compilation.

Next segment contains a selection of vocals and dubs released through Zion Train's labels Deep Root and Universal Egg. With the exception of Dr. Dubious and Sister Verdiana - Stone In the Wall Dub, which was taken from the third chapter of the excellent Italian Dub Community Showcase series.

Lyrical Benjie is no stranger to the Dubroom visitors. The Netherlands-based Roots Singer is a veteran vocalist, and to listen to his conscious lyrics over a Vibronics and a Dubcreator track is a blessing for the soul. Hopefully, the trtack you can hear straight after the Dub of "Ten Plagues" gives you a good vibe as well, since this is a track taken from the fresh mixes in the Dubroom studio. As you may or may not know, there's hard work going on in establishing a new sound, well, this is just one Dub out of many that may or may not be released later. Just listen to the track, and -when you want- give a little feedback. This is also welcome for the Dub from Dennis Alcapone's "Got To Be Conscious", by the way. That one track can be downloaded for free.

Again, Izyah Davis and Fullness. Taken from the album "Arise" (reviewed in the Dubroom), this show features the title track. A superb track of which we play the vocal and the Dub. Closing off, two crucial Dubs by the UK based Nucleus Roots collective. Massive, heavyweight!