WWW, December 13 2009 - In the summer of this year, I was at the edge of a nervous break-down. Couldn't eat or drink, would be worrying and doing things all day, and it all had to do with some very intense things going on in my private life.

It was so happy that even though I took a month off from Dubroom, I was unable to update the site even for a week after that and when I could, all I could was writing an update basically explained how I was unable to do a thing.

For two years, I had to deal with all kind of official people and organizations, in different countries and with different functions. The climax came in the summer as many delayed things came on my desktop together with things planned for that time as well...

Not to mention the things that came before they were planned... 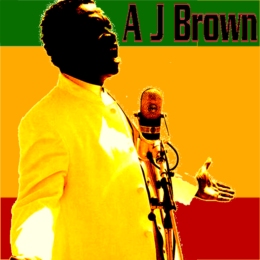 WWW, December 13 2009 - The Real Rock riddim is often used, and in this one AJ Brown explains just why that is: it's one of "Jah's favorite weapons". Very atmospheric, kind of original, and definitely interesting!

WWW, December 2009 - Black Supremacy For Africa takes us back to the times we know as the 1980's: the system of Apartheid in South-Africa was still in it's political place and the Racist State still had Nelson Mandela in jail rather than in the president's office.