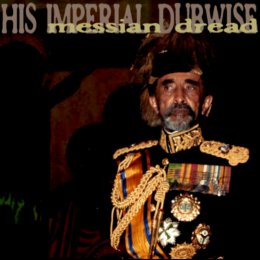 WWW, May 2014 - Presented in two different versions, each with their own distinctive vibe: His Imperial Dubwise is the first release in the new Messian Dread/Dubroom sound. New Sound? Yes! Check out the result of a major upgrade while picking up a Dub that can be described as a must-hear for everyone with an opinion about His Imperial Majesty.

His Imperial Dubwise comes in two different mixes. The first one contains 4 minutes of intense mixing where no instrument or vocal is left unchanged by the effects. Effects that are evidently different and better than the ones used before. It's in this first mix that you can really check that out for yourself while the extended Dub which follows carries a message that is as relevant and important as it was when it was delivered back in 1966.

It's all about a speech entitled "One Race, One Gospel, One Task". He spoke the words in Berlin during an evangelical congress organized by the well known evangelist Billy Graham. Addressing christian evangelists and leaders, he encouraged them to spread the Good News of Jah Salvation. But not after having been welcomed with an ovation that lasted well over a minute. And not after having been introduced as the obvious choice of "Chief of State to come and greet us in the Name of Christ" by Billy Graham himself.

Yes, we are speaking about an introduction to the Biblical and spiritual relevance of Ethiopiah and His Imperial Majesty Haile Selassie the First. An introduction that transcended merely opening for a speech back in '66 as Billy Graham sums up the many reasons why his choice of Ethiopiah and H.I.M. to address a congress of evangelists and other workers for Christ is so obvious.

This release can therefore serve as an educational tool while the new sound which is currently under development can be discovered in -especially- the first track. The effects and techniques used are new, at least partly. At the time of this release (May 2014), there's hard work in the studio as many tracks are produced which Jah willing be eventually released and they will hopefully surprise both friend and foe.

This two track release is presented as 128/320 Kbps MP3 Files or true CD Quality WAVE Audio, as usual with releases out of the Dubroom Studio. Click "DOWNLOAD" to go to the Download Page. All Rights reserved © 2014 Messian Dread/Dubroom