Step It Up In Dub (EP) (Dubroom Net Label Release)

STEP IT UP IN DUB (EP)
DUBROOM NET LABEL RELEASE 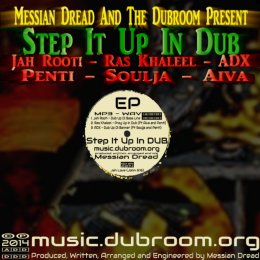 WWW, October 2014 - Hard hitting Steppers riddims form the foundation of this EP featuring seven vocalists in three long and intense Dubwise mixes. Extreme Dub work-outs on the bass, in fact there's a lot of abuse of the effect devices overall in this release. While the vocalists deliver enough lyrical content, sounds of creation and full blown instrument sections add to the undeniable power of the drum and bass lines.

While the three tracks can be played as a single track, for example in a play list or DJ set, listening to the full 16+ minutes will put them in a perspective. This EP is about the power of the bass, which -as a scientific study recently documented- is not just a slogan chanted in the Dance or otherwise, but a reality. The bass as foundational sound? Here is where DUB undisputedly stands at number one. That's reality too!

The second track is very deliberately put in the center of the three-track release. It's about the sound of a much greater power than any man-made bass instrument. It's about a power described in oh so many Rastaman lyrics and that's the power of JAH, audible in the real thunder and lightning. In the first track we'll hear everything about the bass line, in the last track we're rising up the Red Gold and Green banner of Conscious Dub.

The power of the bass, of thunder and lightning, blesseth are those that know themselves to be rooted in JAH.

Of course, with this trinity of Dub track about (Jah) Power you're given a hint to search something about another Ikon of the Power of Jah, Who Himself is a Trinity just like we little people are (body, soul spirit).

With such a foundation, yes, step it up!

Stepping it up in three different Dubwise mixes, wherein no instrument, voice, slider knob or button is left untouched. Even though everything stays coherent, the hardware was put to enormous work as sometimes no less than seven different effects are used in the same time.

Stepping it up in three hard-hitting steppers riddims, all with real horns and real this-and-that and original Dubroom bass lines. Visit studio.dubroom.org when you are interested in the more technical or legal aspects of this release, which is -as all Dubroom productions- fully legal and licensed.

It takes a while before you know what Jah Rooti is talking about, but after about 30 seconds or so you'll get the point more than clear. As the tune continues to develop after the initial start, effects are layered to the extend that it is no longer clear just what effect comes from which source. Not just nice for a little studio research but also for the enjoyment of Dub music.

Then, everything drops except for the bass and Jah Rooti chanting about the bass line. Filters and reverbs are not spared and when the drums finally drops back in the Dub gets into a yet weirder phase, only to come back with full instruments and singing and lead to the end in yet another segment of full-effect style mixing.

Ras Khaleel - Pray Up In Dub (ft Aiva and Penti)

Definitely the center-piece of this EP, it's length being an indication of it's importance in the story of Step It Up In Dub. True sounds of nature open up, including a massive thunder roll. During this exposition of Jah Power, a melodica and Ras Khaleel lead us to the horns and Penti telling us what to do when we wake up in the morning: chant a psalm. Ras Khaleel enters asking for some positive thoughts while I and I pray as we pray about serious things.

Why does Babylon take our life for granted, killing our brothers and our sisters in a continual war against mankind and it's Creator? It should be about love, no hate should come around as we live this life that our Creator has given us. Once again, here is the message of One Love in Dub.

Penti opens up giving a short history lesson before ADX continues to describe the current situation. Soulja takes over and calls for more love, honor and respect which is what has to be done in these current times of violence and hatred. Reggae, and especially DUB has spread from Jamaica to the UK to the whole world and has stood at the roots of virtually all electronic musical styles and techniques.

Where the music is so influential, so should the Message that comes with this Music since ancient days.

That's why we rise up the Banner of Red Gold and Green.