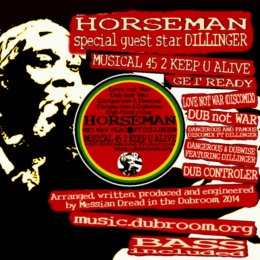 WWW, July 2014 - Two full-length Discomixes and three Dubs: yes, with almost 30 minutes of music this is the first EP from the Dubroom Studio in the new 2014 sound. Featuring Horseman and Dillinger as well as a number of singers delivering a conscious message, this release brings you both a Steppers Roots and a Rub a Dub vibe. Here is a Musical 45 to keep you alive!

The concept of a DJ chanting over a riddim and singers jumping in and out is not new, not original, not uncommon. Where many styles and genres have incorporated the concept, no one can take away the fact that this all started in Jamaica during the 1970's and even before that. No one can deny that Roots Reggae music, mixed in Dub style, is a perfect foundation for a DJ to chant over and exactly that is what you can find in the two Discomixes. The first one (Love Not War) is a pumping Rub a Dub style, the second a joyous yet serious Steppers Roots.

The concept of a vocal track followed by it's Dub version in a non-stop mix isn't anything new, original or even uncommon either. Neither is Dub mixing. Both have been developed in Jamaica as well, a fact nobody can deny and therefore many will simply ignore. Not so in the Dubroom, where we are aware that we owe Jamaica a lot, if only for the musical and cultural upliftments. Therefore, two authentic Discomixes and two authentic Dub mixes, plus one bonus Dub just because music is nice.

All five tracks carry the voice of Horseman, who has been chanting since the 1980's and was released on the Greensleeves label. Two tracks carry the voice of Dillinger as well. The man who brought the world "Cokane in my Brain" and a flood of Roots Reggae DJ Tracks even a decade before Horseman came to the (UK) scene. Both deliver a musical message, a Conscious message like Reggae and Rastafari have been doing for decades and will keep doing.

All five tracks are original Dubroom productions. The vocals are legally obtained and licensed, the music and vocal arrangement created and mixed by Messian Dread using the new Dubroom 2014 sound with real horns, real this-and-that and of course real, authentic Dub mixing. Feel free to include the music in your podcast or broadcast, but please do not put the actual mp3 files on your website blog or other distribution format.

This two track release is presented as 128/320 Kbps MP3 Files or true CD Quality WAVE Audio, as usual with releases out of the Dubroom Studio. Click "DOWNLOAD" to go to the Download Page. All Rights reserved © 2014 Messian Dread/Dubroom