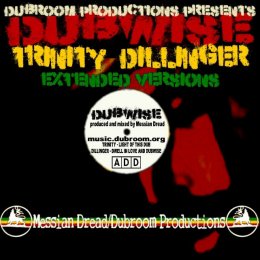 WWW, August 2014 - Two Heavyweight Dubwise tracks in their extended version, both carrying the voices of two Heavyweight Reggae MC's each with their own impressive career dating back to the 1970's when Dillinger made a world hit with "cokane in my brain" while Trinity voiced the now absolutely classic Jesus Dread for Yabby You. Listen how they sound on the original Dubroom riddims in this fully legal and licensed free virtual 12", and then get ready for the full length DUB album that follows after this release.

Granted: most 12" vinyl releases will carry Discomixes that sometimes last up until 9 minutes, where the two tracks on this release together last about eleven minutes. However, the longer a track the less room there is for a good bass and that's the reason why this release is brought to you as a virtual twelve inch maxi single: this is Sound System Style Dubwise and that means nuff bass!

TRINITY - LIGHT OF THIS DUBWISE (EXTENDED)

The track opens with the typical Sound System DUB Siren, while Trinity starts introducing the track and the Name of the Light of this world, when the basds drops in, the drums follows and there is a militant style stepper with nuff space for MC's to add their own lyrics without forgetting the fact that this is a Messian Dread Dub and that means nuff Dub mixing as well.

With excellent backing vocals from none other than Don Goliath, Dillinger's part of this two-track release has a less militant yet equally strong Roots vibration. On the other hand, the Dub mixing is more intense in this one. The horns, recorded in Mad Professor's Ariwa studio, are completely transformed at times. Like the vocals, that is. More than enough message in this one, too!